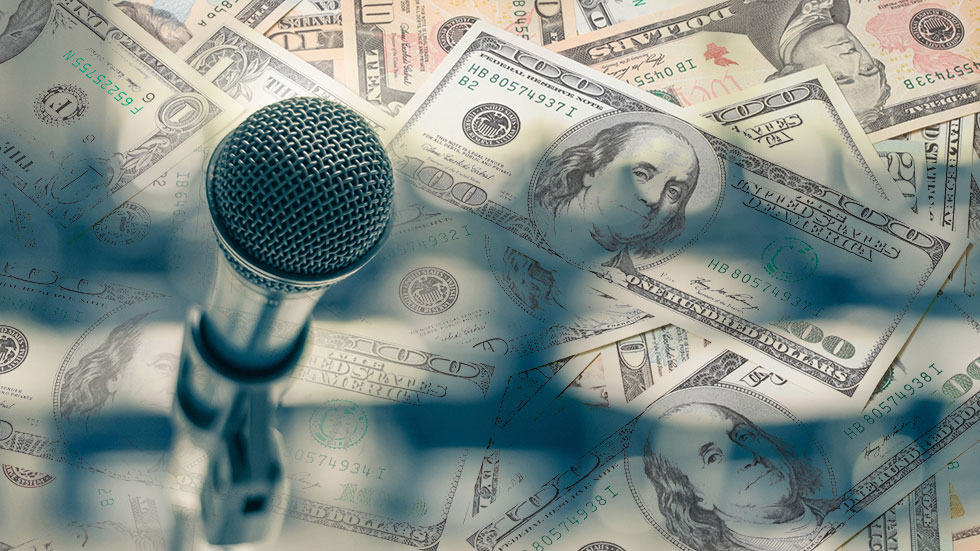 Super PACs and party committees filed their latest campaign finance reports this week, and with the high-stakes battles for House and Senate control fully underway the money being spent (and raised) is reaching historic levels.

Super PACs have poured more than $555 million into midterm elections so far this cycle, according an analysis from the nonpartisan campaign finance watchdog OpenSecrets.

Why it matters: Election Day is quickly approaching — we just passed the seven-week mark. Several races in the House and Senate remain very tight.

Republicans are hoping to flip one, if not both, of the chambers, and every penny counts on both sides.

Five takeaways from this week's reports:

Congressional leadership committees dole out dollars: The Senate Majority PAC, which is aligned with Senate Majority Leader Charles Schumer (D-N.Y.), has spent $36 million this cycle, while its GOP counterpart Senate Leadership Fund, which has the backing of Senate Minority Leader Mitch McConnell (R-Ky.)has spent $25 million. The House Majority PAC, which supports Democrats, has spent $15 million this cycle, compared to the GOP's Congressional Leadership Fund, which has spent $28 million on 2022.

Hey big spender: The PAC that's spent the most this cycle has been the conservative Club for Growth PAC, which has doled out more than $43 million as of the end of August.

Money talks: The PAC money spent to date on candidates (both for and against) makes it clear where the battle lines have been drawn. When so much money is being poured into a race, it's a safe bet that the strategists think it's competitive.

The top five races by dollar as of the end of August: Senate campaigns in Pennsylvania, Georgia, Arizona, Ohio and Wisconsin.

Not so inspiring: So where are PACs totally checked out? North Dakota and South Dakota Senate races. Each has generated just $1,475 in PAC spending against the Republican candidates, both from the liberal Really American super PAC.

Trump keeps to himself: Former President Trump’s Save America leadership PAC has tirelessly fundraised since he left office, often fueling his supporters' animosity with emails that include unfounded claims that the election was stolen from him or that they need to donate so he can push back on President Biden.

Trump has endorsed Republican candidates and traveled the country hosting large-scale political rallies in battleground states, but his PAC has $99 million left in the bank and its most significant spending this cycle (aside from what it's spent on Trump's legal fees) has been $650,000 on the effort to defeat his personal foe, Rep. Liz Cheney (R-Wyo.).


Welcome to NotedDC, your guide to politics, policy and people of consequence in D.C. and across the U.S. Today’s newsletter comes from The Hill’s Liz Crisp.

One of the most anticipated interviews with the House committee investigating the Jan. 6, 2021, attack on the Capitol is on.

A lawyer for conservative activist Ginni Thomas, wife of Supreme Court Justice Clarence Thomas, said she would sit before the panel “to clear up any misconceptions about her work relating to the 2020 election.”

“She looks forward to that opportunity," her attorney, Mark Paoletta, said in a statement.

Thomas, a supporter of former President Trump, reportedly was active in efforts to subvert President Biden's 2020 election win in several states and hand Trump a second term. The committee, formally known as the Select Committee to Investigate the Jan. 6 Attack on the United States Capitol, has sought information from her about what she knew before hundreds of Trump supporters stormed the Capitol while lawmakers were trying to certify the election.

Thomas has denied any wrongdoing.

Timing's everything: Thomas's testimony comes as the committee tries to wrap up its work ahead of the November midterm elections. To date, the committee has held hundreds of closed-door interviews, including with key Trump allies.

What's next for the committee: After a two-month hiatus from public hearings, lawmakers will resume their work next week. The next hearing is scheduled for 1 p.m. Wednesday. It will be streamed online and most major networks are expected to air at least parts of it.

If you want to catch up or rewatch any of the panel's previous hearings, they're all available here on the committee's website.

Legislating away: The first legislative product to come from the committee — an overhaul of the Electoral Count Act sponsored by committee members Reps. Liz Cheney (R-Wyo.) and Zoe Lofgren (D-Calif.) — passed the House this week. The Senate is mulling its own version of the measure.

The clock is ticking on efforts to avert a federal government shutdown with passage of a temporary spending package by Sept. 30.

Leaders aren't yet panicking, though it could come down to the wire.

The Senate has been trying to reach an agreement with Sen. Joe Manchin (D-W.Va.) on energy regulation reform but it's faced opposition from Republicans and some on the far left. More on that fight here from The Hill’s Alexander Bolton.

The general plan is to start with a stopgap spending measure in the Senate and then advance it to the House for final approval next week.

The House won't be back in session until after sundown Tuesday as members observe Rosh Hashana, the Jewish New Year. But House Speaker Nancy Pelosi (D-Calif.) said that shouldn't be a problem.

"We are prepared to take it up," Pelosi said. "We have same-day authority already built in."

She said she's also prepared to act if the Senate doesn't hash out its final plan.

"If they don't we'll have to start it over here," she said.

Four months after the House voted to allow congressional workers to unionize, the first vote among staffers — an up or down on whether to go forward with the unionizing effort — took place in Rep. Andy Levin’s (D-Mich.) office on Thursday.

“We are just getting started unionizing the Hill and are working continuously to move towards elections in several other offices,” the Congressional Workers Union said in a news release on the vote.

Congressional workers started planning to unionize in January, leading to the resolution that members approved this summer. Each office will individually decide whether to join.

Ears up: Grammy award winner and all-around icon Elton John is set to perform on the South Lawn of the White House on Friday. With the right conditions and volume, you just might get to hear a bit of what's sure to be an amazing performance from outside the secure perimeter. (The Ellipse is probably the best option.)

As for who will get to attend the intimate concert in person, the White House has invited a group of "everyday history-makers" — nurses, mental health advocates, teachers and other COVID-19 front-line workers, as well as students and LGBTQ+ advocates — to enjoy the show.

"A Night When Hope and History Rhyme" is being held in collaboration with A+E Networks and The History Channel, so watch for it to air on television.

A bit of drama: It’s well known that John is one of former President Trump's favorite musical artists. His music is on the playlist for Trump's rallies, but he turned down an invitation to perform at Trump's inauguration in 2017.

“Thank you so much for the extremely kind invitation to play at your inauguration,” John wrote in response to the request, according to The New York Times. “I have given it at lot of thought, and as a British National I don’t feel that it’s appropriate for me to play at the inauguration of an American President. Please accept my apologies.”

Percentage of people who approve of the job President Biden is doing, according to a new poll. It’s the highest his approval rating has been since December 2021.


Have some news, juicy gossip, insight or other insider info? Send tips: Elizabeth Crisp. And encourage friends to sign up here: thehill.com/noted.

See you next week!